Ioseb “Joseph” Jorjoliani was born on September 1st 1995 in Tbilisi, Georgia. In 2013 Ioseb graduated from American-Georgian Education Center (Private High School “Logos”). Since 2011 he has been an active member of the European Youth Parliament, to this day, Ioseb has attended more than 15 sessions both on national and international levels on the positions of a chairperson, a delegate and a journalist. In 2013 he was awarded with a scholarship from both the Georgian Prime Minister’s office and Washington and Jefferson College for his undergraduate studies. His academic majors comprise Communications, German language and Entrepreneurial studies. Mr. Jorjoliani interned at the official external broadcast institution of the United States “Voice of America” in the summer 2014. Now he works at the Washington and Jefferson Radio Station (WNJR.ORG) where he hosts a show “Global Perspectives with Joseph Jorjoliani”. He also writes articles for college newspaper “Red and Black”. In October 2014 he was appointed a Young Ambassador of Georgia to the United States  by the Ministry of Sport and Youth Affairs of Georgia for one year term.

Konstantine Mushegiani was born on July 7, 1995. In 2013 Konstantine graduated from a private high-school “Mtsignobrtukhutsesi” with honors, receiving a golden medal of academic excellence from the Ministry of Education and Science of Georgia. He has been involved in multiple academic and non-academic activities throughout his high school years. Konstantine is currently a sophomore at Bowdoin College, majoring in Computer Science and Mathematics, and minoring in Economics. Konstantine plays rugby at Bowdoin, and is a member of Bowdoin’s Robotic Soccer team.

Tamar Kavlashvili was born on September 15th 1995. In 2013 she graduated from 55 Public School of Tbilisi. In 2013 she was awarded a governmental scholarship for her undergraduate studies at the University of Iowa. In 2014 she was awarded an International Education Center scholarship for her subsequent years at Iowa. Her academic majors include Biology with Genetics & Biotechnology track, Arabic and University Honors. Tamar is an active member of the Campus Activities Board cultural committee. She volunteers for International Student and Scholar Services where she serves as a peer mentor and is a leader of an orientation program On Iowa. Since 2013, Tamar is a member and a peer adviser of the University’s Honors Program. Ms. Kavlashvili works as an undergraduate research assistant at the Carver College of Medicine Holden Cancer Laboratories in the endometrial cancer research lab under the supervision of Dr. Xianbing Meng.

Ia Tserodze was born on 21st October, 1995. In May 2013, she graduated from the American-Georgian Education Center (Private High School “Logos”) as the valedictorian of her class. In 2010, Ia became a member of the European Youth Parliament. She is currently a member of the National Committee, together with being actively involved in the HR department of the organization. In 2013, Ia started working towards her undergraduate degree at DePauw University. Ia was awarded with DePauw’s Presidential Scholarship for Excellence together with the Georgian Government’s academic scholarship. Currently a sophomore Creative Writing and French student, Ia has firmly held a position on the Dean’s List during every semester she spent at her university. For her excellent academic achievements, she was also invited as a member of an honor society: National Society of Collegiate Scholars (NSCS). During her fall semester, Ia became a member of the editorial for A Midwestern Review, and served as a judge for the submissions in the Art section. Her future plans connect both to the Writing and the Conflict Studies field, the reason why Ia applied and got chosen as a representative at the very first European Student Conference, going to be held in February at Yale University. 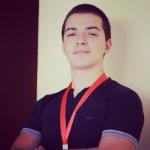 Luka Modebadze was born on July 10th 1996. After graduating from private high school ”Logos” in 2014, he got accepted by Hamilton College. Currently, Luka is a first-year student interested in world politics, economics, and Chinese language. Furthermore, as an alum of the European Youth Parliament, Luka is a member of Hamilton College Model European Union Team.